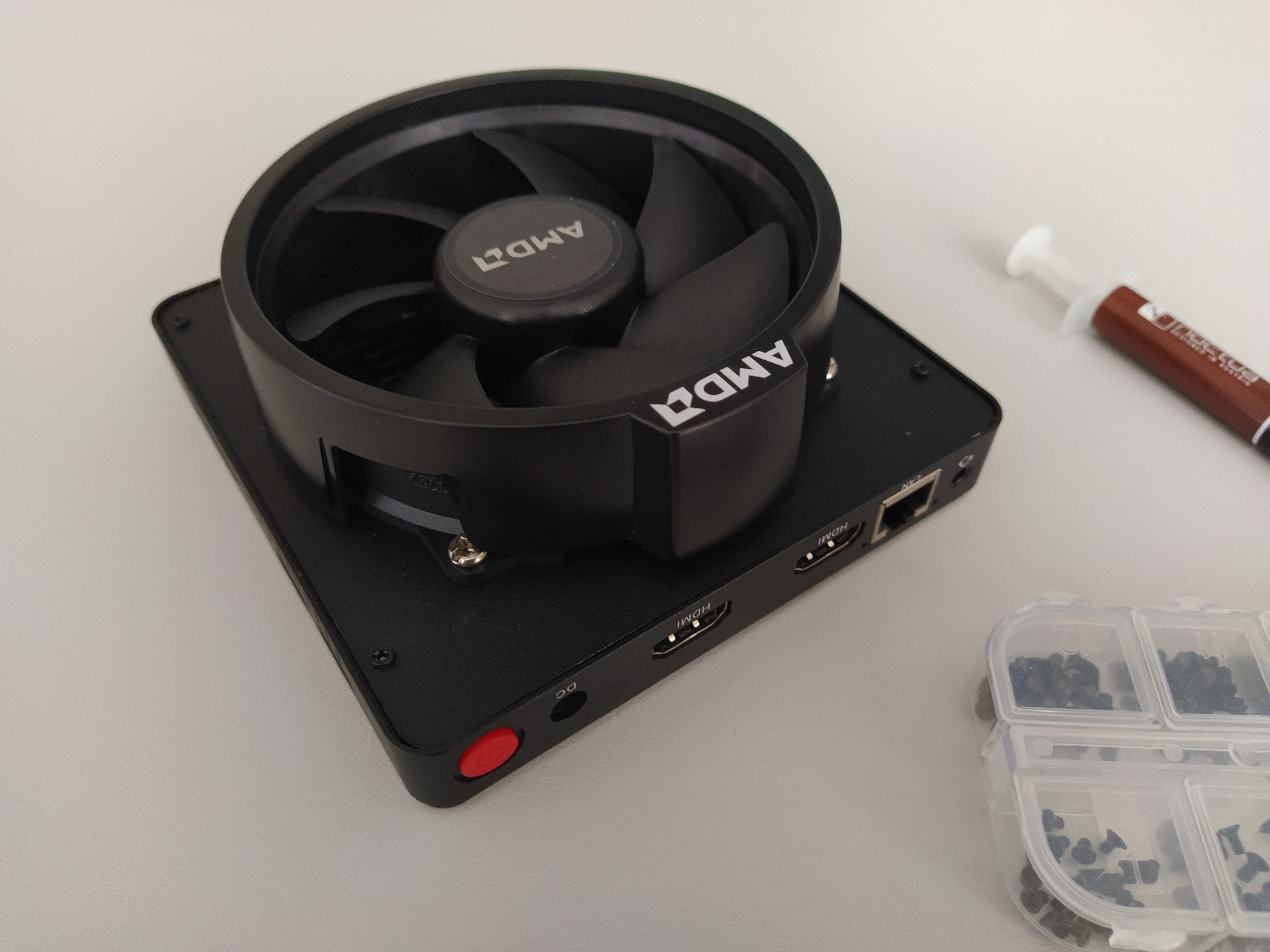 This machine has Windows 10 installed when delivered. Fortunately installing Xubuntu 20.04 on the Beelink T34 is very easy as it is an Intel x64 CPU with UEFI boot support. You need to press F7 after turning the machine on to enter the BIOS boot menu. It installs fine if you use a USB stick with a GPT partition table and a FAT32 partition containing the Xubuntu ISO contents (I used a USB port on the headphone side of the machine).

Downside: It is getting very hot

During installation I noticed that the Beelink T34 was not fully silent, as it has a small 2cm fan inside. And even though this machine has a fan, it is still getting uncomfortably hot (especially the bottom plate). This is ‘by design’ as the manufacturer has put a warning sign on the bottom plate stating "High temperature (...) is normal". Apparently the airflow is not sufficient to keep the (outside of the) box cool.

While researching the Intel n3450 series, I installed the following tools:

And it told me to install these ones as well:

You can use the following command to learn a lot about the CPU:

To understand why there was so little airflow, I decided to take a peek inside the box. You do this by removing the two rubber feet (strips) that the machine stands on and unscrewing the four screws that you find underneath. When you remove the (metal) bottom plate, you see a large metal heat-sink with a tiny 30 x 30 x 5 mm "BROAD" fan (model BF03004L05) on top of it. The fan seems to be designed as an air intake for the case. The air needs to flow in through the small circular ventilation openings in the bottom plate. The rest of the box is made out of hard plastic and has small ventilation openings to let the hot air escape. It is clearly not generating enough airflow to keep the outside of the box cool when the CPU is continuously running in turbo mode.

I replaced the small fan with a 92 mm "AMD Wraith Stealth" CPU fan I had lying around. This fan came bundled with the AMD 3400G CPU of my latest DeskMini A300 build where I used a Noctua Low Profile AM4 (NH-L9a-AM4) to make the machine more quiet. Since this AMD fan is much larger (92 x 92 x 30 mm) than the original (30 x 30 x 5 mm), it requires an "out-of-the-box" solution (pun intended) to fit it. I decided to put it "on" the box instead of "in" the box. I applied this mod also to the T4, so you can follow the instructions from that post. Note that you do have to cut the connector from the old fan and solder it on the red and black wires of the new fan.

I used a 0.8 mm polypropene (hard plastic) plate to trace and cut the new bottom plate from. Then I used 4 black M2 x 10 bolts to screw down the new bottom plate on the case. I cut a 8 cm hole in the middle with a knife and a pair of scissors. I used 4 silver #6-32 UNC bolts to hold the CPU fan in place. I created the screw holes in the polypropene by melting it using a heated nail of the right size. This process requires some exact measuring, but can be executed in 5-15 minutes and the material cost is very low (a few euros).

I ran the tool "stress" to have 100% CPU load on all cores (using "stress -c 4") and started a HD YouTube movie next to it. I let that run for one hour (ambient temperature was 21 Celsius) and the CPU temperature peeked at 46 degrees Celsius. Note that the CPU fan is already under-volted from 12 volt to 5 volt, causing the fan to run slower than it's maximum speed. You could try to make the fan run even slower (using a resistor) if you want to further optimizing the noise/temperature balance.

I'm very pleased with the build. On one hand it may look a bit DIY, but on the other hand it looks very geeky. The slow rotating AMD fan will catch people's attention and they will certainly ask "Hey, what is that?". The box is cheap at 120 euro and with these modifications it's performance is good (considering it's price). My conclusion is that it runs great as a server and/or HTPC and even for light web browsing and/or light office work as it sports a 128 GB (mSATA) SSD and 8 GB of (DDR3) RAM.