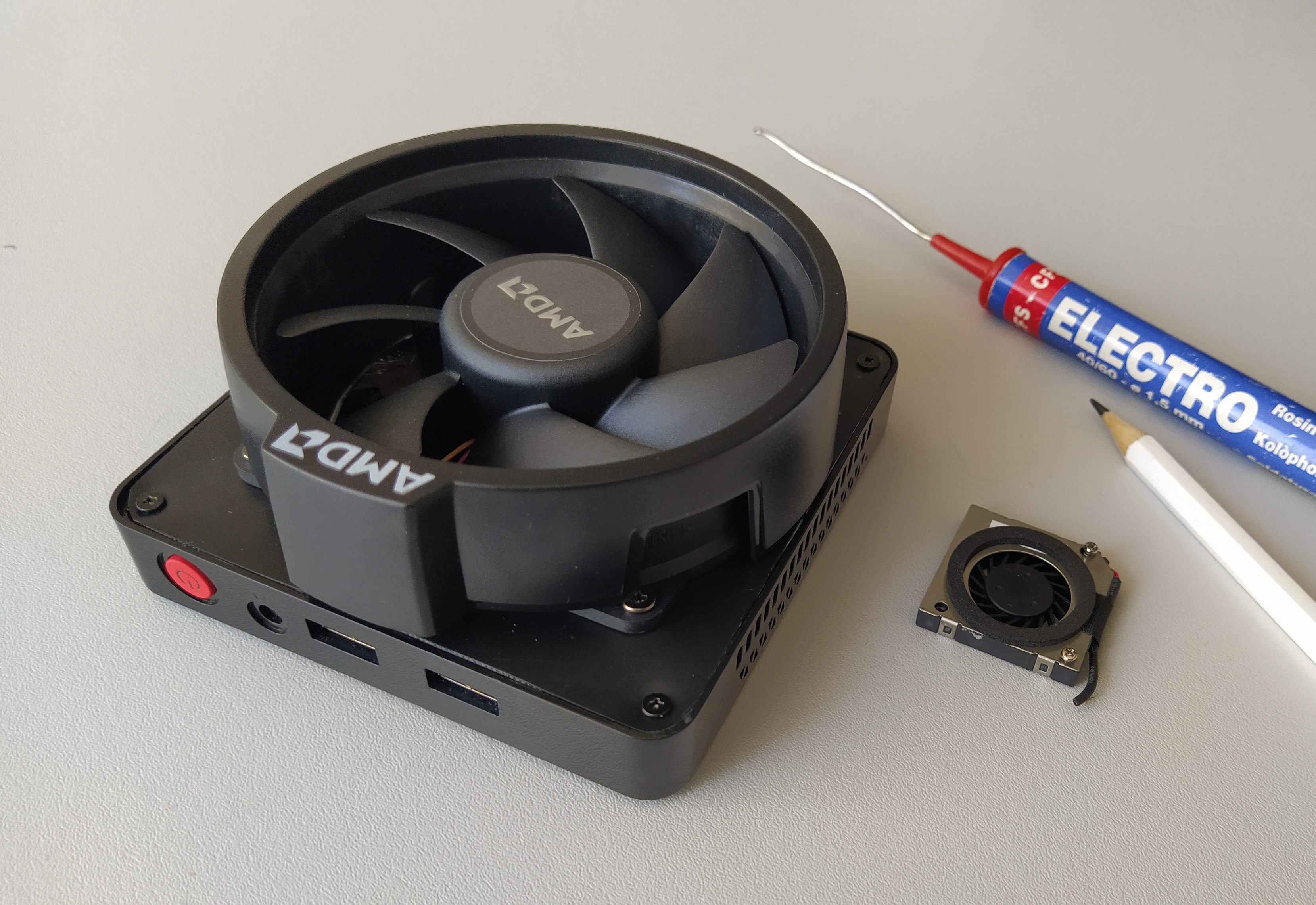 This machine has Windows 10 installed when delivered. Fortunately installing Xubuntu 20.04 on the Beelink T4 is very easy as it is an Intel x64 CPU with UEFI boot support. You need to press F7 after turning the machine on to enter the BIOS boot menu. It installs fine if you use a USB stick with a GPT partition table and a FAT32 partition containing the Xubuntu ISO contents (use the USB port next to the HDMI port).

During installation I noticed that the Beelink T4 was not fully silent, although pictures on the web suggest that there is also a passive cooled version (without a fan). I got a version with a small (audible) fan. And even though this version has a fan, it is still getting uncomfortably hot (especially the bottom plate). This is ‘by design’ as the manufacturer has put a warning sign on the bottom plate stating "High temperature (...) is normal". Apparently the airflow is not sufficient to keep the (outside of the) box cool.

I tested some applications after the installation had finished and, for instance, Firefox felt a little slower than I expected from this processor.

While researching the Intel x5 Atom series, I ran into this answer from "Chris G from TechTablets.com" on a Z8300 overclocking question:

Thank you Chris! The RAM of the Beelink T4 was indeed underclocked to 1066 Mhz. You can change this by entering the (American Megatrends) BIOS using the "Del" key and then navigating to "Chipset > North Bridge Settings > Memory Configuration Options > Frequency A selection" and “Frequency B selection” change both values from "1067" to "Auto". 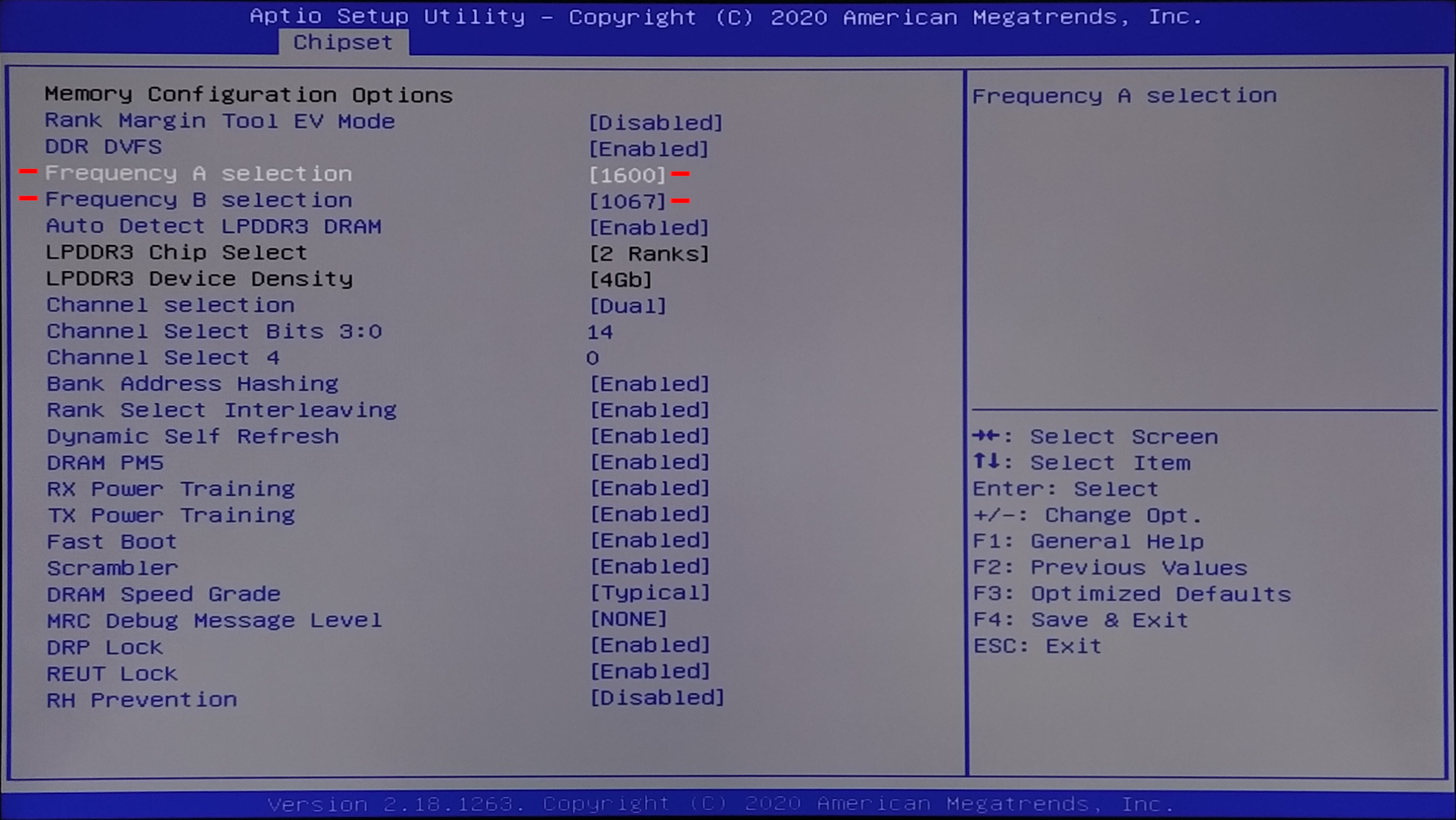 Intel IGD Configuration. IGD Turbo Enable = Enabled This option allows the GPU To turbo boost to it's max boost clock of 600Mhz from it's default value of 400Mhz. Power Meter Lock = Disabled This option if enabled will only allow for short bursts of turbo, disabling it allows 600Mhz properly. (source)

This turbo was also not unlocked on the Beelink T4. You can change this by entering the (American Megatrends) BIOS using the "Del" key and then navigating to "Chipset > North Bridge Settings > Intel IGD Configuration > IGD Turbo Enable" and change that value from "Disabled" to "Enabled". Underneath that setting you find the "Power Meter Lock" and you should change that from "Enabled" to "Disabled". 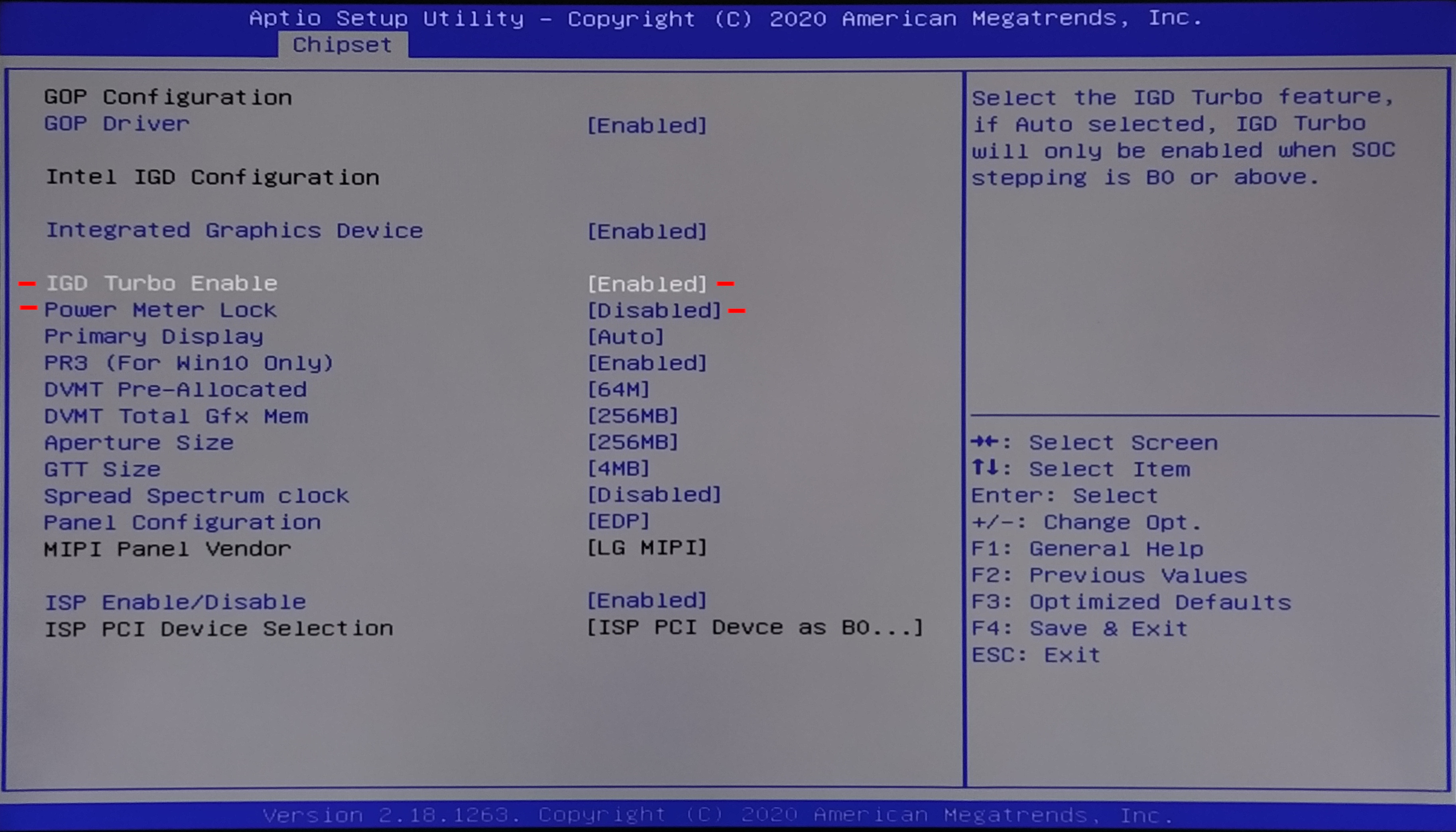 In my tests these changes resulted in a noticeable better performance, while I did not notice a difference in CPU temperature.

To understand why there was so little airflow, I decided to take a peek inside the box. You do this by removing the two rubber feet (strips) that the machine stands on and unscrewing the four screws that you find underneath. When you remove the (metal) bottom plate, you see a large metal heat-sink with a tiny 30 x 30 x 5 mm "BROAD" fan (model BF03004L05) on top of it. The fan seems to be designed as an air intake for the case. The air needs to flow in through the small circular ventilation openings in the bottom plate. The rest of the box is made out of hard plastic and has small ventilation openings to let the hot air escape. It is clearly not generating enough airflow to keep the outside of the box cool.

I don't like computers that get so hot that you can't touch them, so I decided to improve the airflow by increasing the size of the fan.

I've chosen to use the box upside down and I've put the two rubber feet (strips) on the other side of the box. I made a new bottom (now top) plate from two layers of sturdy black packaging plastic that I carefully cut out to the right size using a pair of ordinary scissors. I glued the two layers together using double sided tape and used a hot nail and a flame to pierce some screw holes (be careful not to inhale the toxic fumes). In the center of the new top plate I cut out a 80 mm circular hole to let the fan blow directly onto the metal heat-sink of the CPU.

I cut the Molex PicoBlade 2 pin connector with some 2 wire cable from the old 30 mm fan and soldered the red and black wire onto the red and black wires of the new 92 mm fan. The new AMD fan is actually an "AVC" model DASH0925R2M. It is supposed to run at 12 volt, while the old 30 mm fan ran at 5 volt. Connecting a 12 volt fan at 5 volt is called "undervolting" the fan. This essentially also what a low noise adapter does, but with a resistor dividing the voltage. Not all fans run or start at 5 volt (some require 6-7 volt), but at 5 volt this particular fan will start and run slow and quiet. 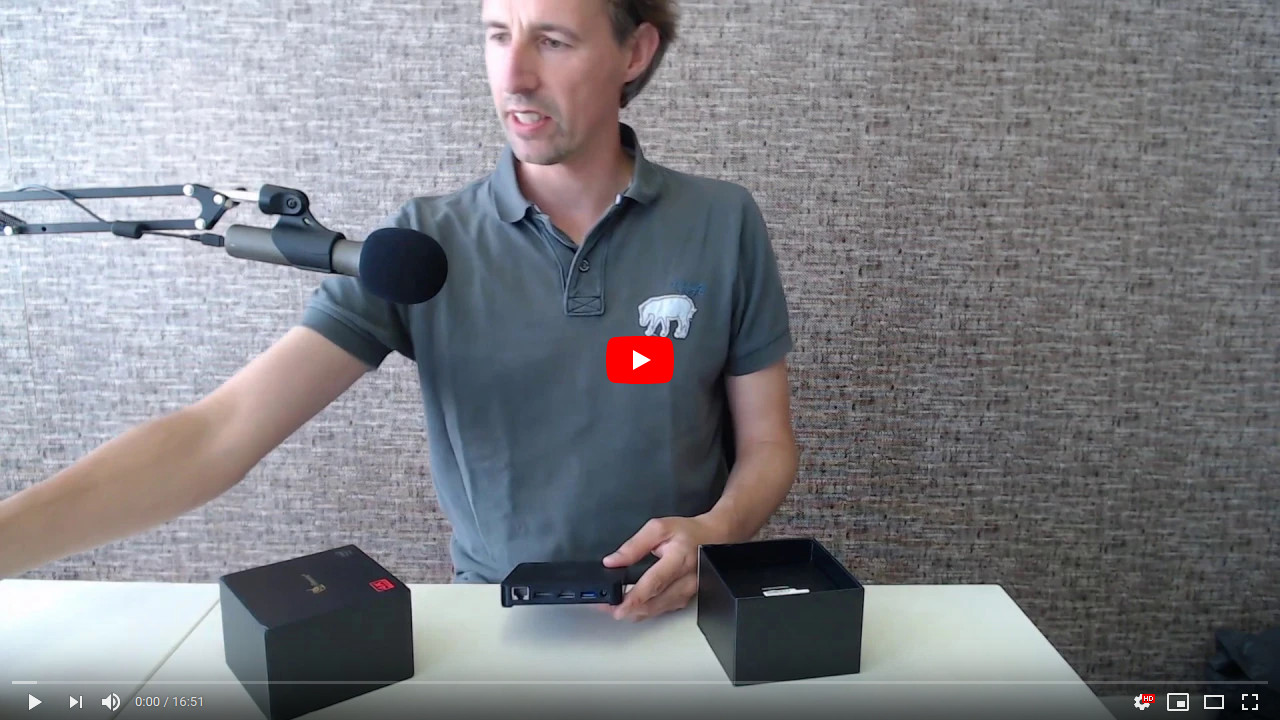 With this new fan the outside of the box did not even feel warm at all, while the CPU temperatures never exceeded 60 degrees Celsius under full load (instead of 75-85 degrees Celsius). Even with the larger fan and the overclocking the system has an idle power usage of 2.5W, which is fine for an always on server, costing about 5 euro per year at 23 euro cent per kWh (for 22 kWh per year).

I'm very pleased with the build. On one hand it may look a bit DIY, but on the other hand it looks very geeky. The slow rotating AMD fan will catch people's attention and they will certainly ask "Hey, what is that?". The box is cheap at 100 euro and with these modifications it's performance is good (considering it's price). My conclusion is that it runs great as a server and/or HTPC, but that you shouldn't use it for web browsing and/or light office work as that would require a SATA instead of an eMMC SSD and 8 GB instead of 4 GB of RAM.