I've built another PC. This time I wanted to create a silent but powerful small form factor PC. It aims to replace my AMD 3400G midi tower with something equally powerful and quiet that fits my desk. I've chosen an ASRock Fatal1ty B450 Gaming-ITX/ac motherboard with a on-board WiFi 5 (802.11ac) in an Antec ISK110 VESA-U3 small form factor case. I transferred the AMD 3400G quad core, the 2x16 GB of G.Skill Ripjaws 3600 a the 2 TB ADATA XPG SX8200 Pro NVMe drive. It is a small, pretty, super fast and not too noisy little box. The case costs 91 euros and has a built-in 90W power supply and comes with an IEC-C5 (also known as "clover") power cable included. Unfortunately the cable I received was UK type instead of EU type. 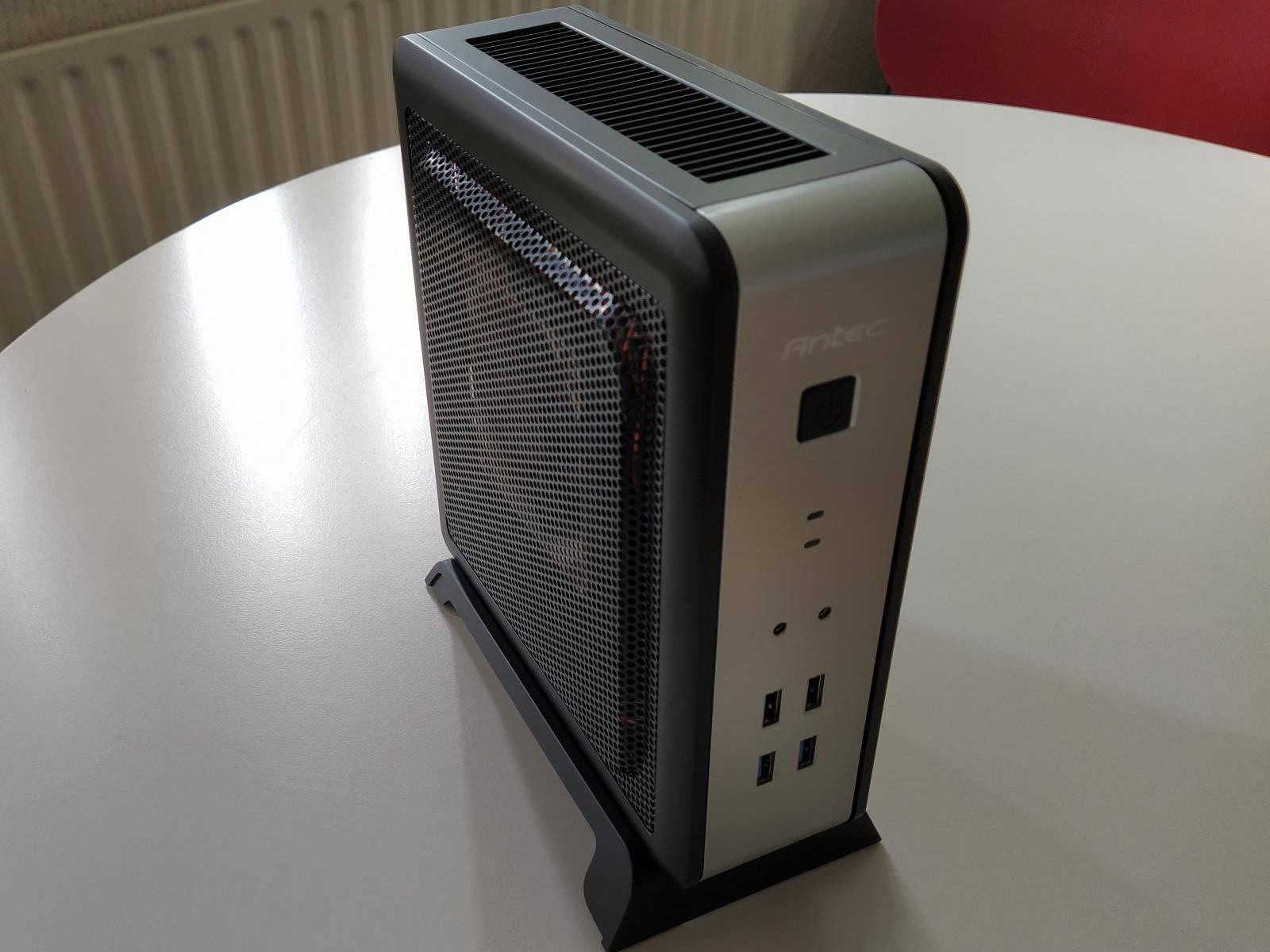 Note that I run Xubuntu 20.04 LTS and it works great, I'm very pleased with the results!

The materials used in this build:

Due to some price increases this build may have been 10-15% cheaper a few months ago.

No, it is not. The CPU has a TDP of 65 Watt and although the machine boots, it will reboot under heavy load (e.g. instant reboot when running stress -c 8). I measured peaks near 90 watt (on the socket) under normal usage. I want my machines to be rock solid, so I was looking for a solution.

The CPU's TDP of the 65 Watt is not the maximum draw from the CPU. TDP stands for Thermal Design Power, and it is the heat a component is expected to output when under normal load. You should count with roughly 1.5 times the TDP rating to calculate the expected power draw under full load. For our system the CPU with TDP of 65 Watt has an expeced power draw under full load of 65 x 1.5 = 97.5 Watt which explains the reboots.

cTDP to the rescue

Configurable TDP (cTDP) adjust the behavior of the CPU, so that it consumes less power. When you have a configured TDP the CPU slows down (throttles) automatically to match this configured TDP value. This is typically used in very thin devices with low cooling capabilities or when a quite mode is preferred over the maximum performance mode. Intel and AMD have different names for the settings that configure the maximum power draw of the CPU (in Watt).

On Intel there is a Power Level 1 and 2 (PL1 and PL2) that can be adjusted in the motherboard's BIOS. PL2 limits the power (in Watt) that the turbo mode uses while PL1 limits the sustained usage. By disabling Turbo and setting PL1 to low value (such as 50) we can limit the power usage of the CPU so that we can use the CPU in a SFF case like the Antec ISK 110.

AMD has Precision Boost Overdrive (PBO) with a feature called Package Power Tracking (PPT). After we enable PBO in the motherboard's BIOS we can set the PPT. The PPT limits the power that the CPU uses (in Watt). By limiting the maximum power draw of the CPU we can ensure that the system does not exceed the 90 Watt maximum that the power supply of the Antec ISK 110 can deliver.

The ASRock B450-ITX motherboard has a BIOS setting where you can set PPT (after enabling PBO in "Advanced" mode). Setting PPT to 35 Watt gives an expected 52.5 Watt usage of the system, which in practice was around 64 Watt on the wall socket (which includes conversion losses). This is well within the limits of the power supply and the machine didn't get very hot, nor loud, nor did it suddenly reboot. Great results so far! 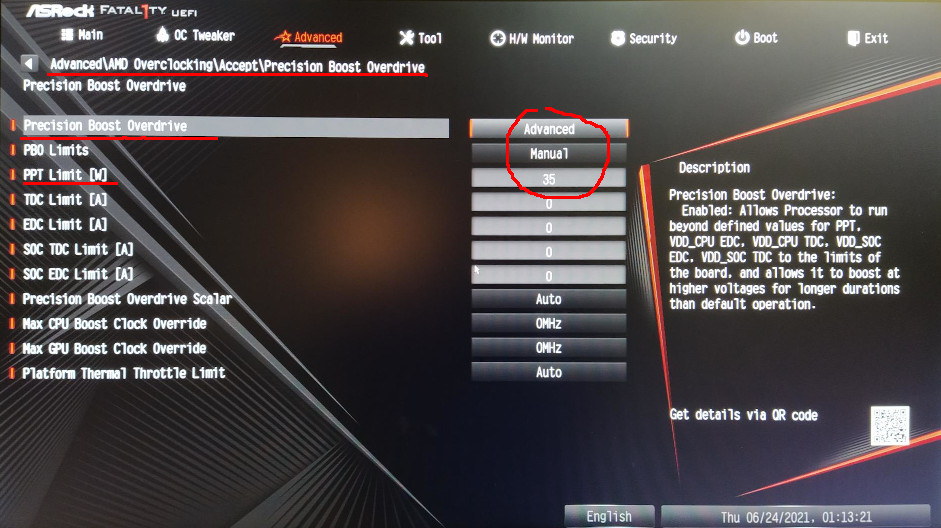 You need to go to "Advanced > AMD Overclocking" and set "Precision Boost Overdrive" to "Advanced", "PBO Limits" to "Manual" and "PPT Limit [W]" to "35" to set the maximum usage of the AMD CPU to 35 watt.

One would expect half the performance at half the TDP, but that's is not how this works. Light tasks (web browsing for instance) is often single threaded and have to wait a lot for I/O, so in these cases you may not experience much slowdown. In my experience the amount of RAM of a system is much more limiting for today's applications than the speed of the CPU. And the impact of limiting the TDP is also low in a more demanding real world scenario like gaming, as you can see here: 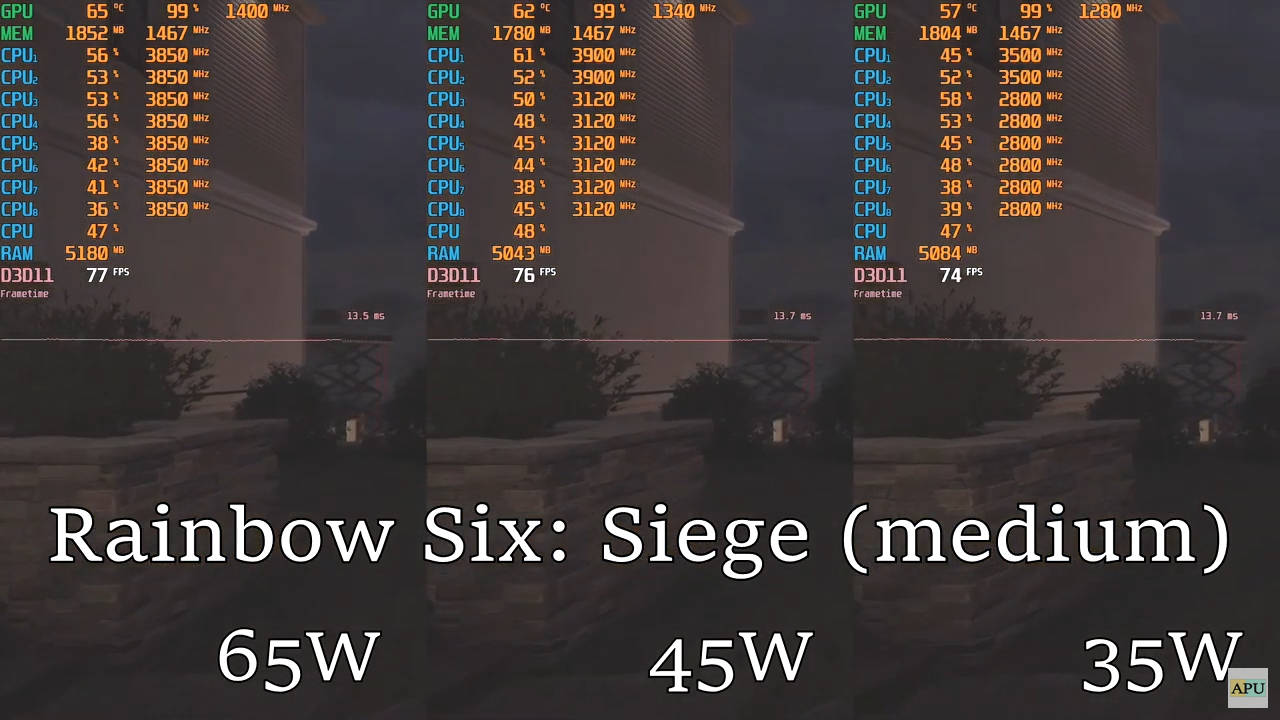 As you can see game performance is hardly affected by a lower configured TDP. Since PPT (or PL1) is not the same as cTDP, my advice is to experiment a bit with this setting and measure the power usage (in watt) on the wall socket to get optimal results. When I set the PPT to 50 the power draw on the wall socket stays safely under 90 watt under full load (around 88 watt).

I also noted that the machine didn't want to load the rated 3600 speed of the GSkill DDR4 RAM using XMP 2.0 in AUTO mode and fell back to 2133 MHz. When choosing the 3200 profile it did run at 3200 MHz. I do not advice running the RAM at lower speeds as this affects the CPU's performance.

Configurable TDP (cTDP in the form of PPT/PL1) is a great tool to lower the power draw of your system with integrated graphics. It influences real world performance less than one would expect, allowing for a quiet PC with a smaller form factor using the same powerful components.